After taking a few months off over the summer, I thought it would be nice to start sharing our favourite books again. This is a combined effort from Win and Ru, and they were so excited to lay them out for me. Bed time is a bit of a rush at the moment, so Ru and I will often cosy up in the afternoon and read lots of books on his bed.

Here is what the boys have been loving lately: 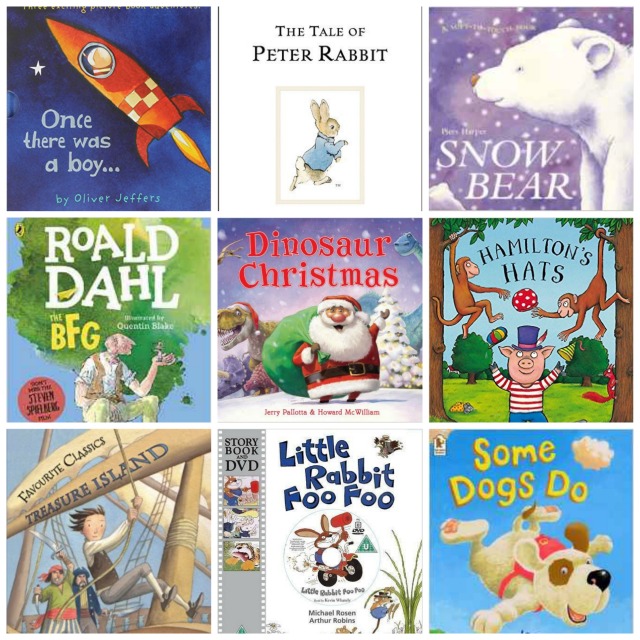 Once there was a boy… – This is a set of beautifully illustrated books by Oliver Jeffers. We received them as a gift, and what a lovely gift they are. The stories are simple, adventurous, heart warming and magical. Really, really special.

The Tale of a Naughty Little Rabbit – I used to love the whole Beatrix Potter collection as a child, and this story is a classic. Peter’s mother is popping into town and warns her four children not to go into Mr McGregor’s garden. Peter ignores her and ventures into the forbidden garden. Will he end up as rabbit pie? I think my boys like this because they love how naughty Peter is!

Snow Bear – Snow Bear is a cub who thinks it is a good idea to go on an adventure without his mum. He gets lost and feels afraid, but after a little searching, he finds her warm embrace again.

The BFG – We recently finished reading ‘The Twits’ to the boys and they absolutely loved it. Especially when Mrs Twit serves Mr Twit some worms for dinner. We’ve gone for The BFG next as they have both seen the new production, which Ru found ‘a bit scary’, but loved.

Dinosaur Christmas – Did you know that before reindeer, Father Christmas used dinosaurs to pull his sleigh? This is a fun tale narrated by Father Christmas detailing the problems he had with each type of dinosaur. He loves reindeer, but sometimes he misses ‘the good old days’.

Hamilton’s Hats – I bought this from a charity shop and the story has a great moral. Hamilton the pig loves hats, and owns one of every single shape, size and design you can think of. He comes across others that want his hats, and he has to do some brave, difficult things to get them back. These brave and difficult things aren’t easy, but he does them anyway.

Treasure Island – I always think this book is a bit too dark and deep for Win, but he doesn’t seem to think about it too much. He just loves pirates, adventure and buried treasure. The watercolour illustration and layout is lovely.

Little Rabbit Foo Foo – Little Rabbit Foo Foo is riding through the forest on his motorbike bopping lots of creatures on their heads. The Good Fairy warns him that if he doesn’t stop, she will turn him into a goonie. Will he stop? Or will he end up a goonie? I find this book so random, but Ru particularly loves it.

Some Dogs Do – Dogs can run, jump and walk, but did you know that some can fly? Some dogs do, and some dogs don’t, but can Sid persuade his friends that it really happened?