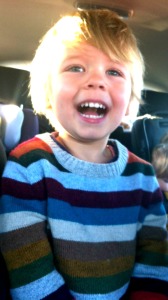 W: Winston had a go at DJing in the car with my iPod shuffle. For some reason, flicking through the songs at super speed really tickled him and he was in hysterics.

Jared and I haven’t really known what to do about the whole ‘Father Christmas’ thing, mainly because we’re both terrible liars, and we don’t want to overwhelm him with Christmas. We’ve been very minimal about it in order to see what he makes of it. Next year I think there will be a few more questions. He had his first sighting of Father Christmas at a Christmas party, and was beside himself with excitement, jumping around and dancing: “Santa, where is your car?”, “Where is the North Pole?” along with “Where is my present?” are all questions that he asked the man in red. He then followed him out the door and asked him if he could see his sleigh: “But, where is your sleigh Santa?”.

R: Ru is a new man after a week of antibiotics and it is so good to have him back. I was glad to see him laughing again and relieved that he’s back to his playful self. He hates being left out of whatever Winston and I are doing, so we have to find a way to accommodate him in our activities. He is not an easy one to fob off – he certainly knows what’s hot, and what’s not!