Now Rufus is roughly 7 weeks old I feel like we are in a very loose routine that works for all of us. When people say your second fits in around your first – they couldn’t be more accurate. When Winston was a baby we had no idea when to start a routine with him, but after 8 weeks of horrendous sleep we decided that something must be done. My older sister recommended Gina Ford’s ‘The Contented Baby Book’, and I found that it gave me some really fantastic tips.

Before having children I always assumed that babies would simply drop off to sleep if they were tired. The babies and toddlers I had seen asleep were always been held in arms, draped over a shoulder, curled up on the couch, on the floor whilst playing, or even whilst sitting in a high chair. Winston has never fallen asleep in any one of those places.

I love routine, and I like to plan ahead, but I also love spontaneity. After following Gina Ford’s routine strictly for about two days, it drove me insane, so I started to follow a looser (self made) version which made me much happier. I know a lot of parents slam Gina Ford, but she really helped teach me so many things about sleep cycles and feed cycles – making sure babies aren’t too tired to feed, how to know they are tired (which we always mistook for hunger with Winston), when growth spurts are likely, which feeds to cut out first, how to encourage them to sleep through the night and how to arrange feeds around weaning.

As a mother I probably should innately know all of these things – but the truth is – I didn’t. I am not embarrassed to admit that I needed a book for someone to tell me such basic things. The routine I had with Winston was a loose version of the Gina Ford routine, and it never stopped me from going out, or prevented me from doing things. Heeding some of her advice meant it was always easier to work out what was wrong, and discover the most sensible times to plan outings, which to be honest was more freeing than restricting.

Since Rufus has arrived I have been looking out for his natural routine and then gently nudged him into one that fits in with Winston’s.  So far it seems to be going well – but of course we still have those days that turn everything upside down. Winston never had a dummy and Rufus is not that keen to be honest, but we have used it successfully a few times to settle him which has been brilliant. Something I am finding invaluable is my Moby wrap which seems to settle Rufus quickly, but also means I have two free hands to contend with a toddler. It is fantastic and I’ve worn it for up to two hours with no discomfort.

As a general rule I try to got out either in the morning or the afternoon each day…but this is written as if we’re in the whole day.

– Winston wakes up for the day.

– Rufus wakes up for his first feed of the day and then goes straight back to sleep for about an hour.

– Jared or I will get up with Winston whilst the other one stays in bed. Whoever gets up with Winston will organise breakfast (pancakes, porridge or eggs). Winston will either draw, play with his toys, read or if he’s feeling mischievous will start emptying kitchen cupboards and drawers.

– Winston will go in the shower with either Jared or I – it is usually Jared. Showers are really useful because you don’t have to supervise as closely…no danger of drowning so I can get a few jobs done if he’s in by himself. I might pass Rufus to Jared too if he’s awake so he can have a quick wash which he doesn’t seem to mind.

– I attempt to get Winston dressed which is no easy task these days. He usually ends up being in just a nappy and vest until I can face chasing him around to do the rest.

– Rufus can quite often be awake around this time, but will fall to sleep again for an hour or so until his next feed.

– Jared leaves for work on his bike. I get myself ready and finish off dressing the boys.

– I feed Rufus which is normally upstairs and takes around 20-30 mins. I close the stair gate so Winston can’t go downstairs. Winston will usually read next to me or empty everything out of our bedside tables. Needless to say, I prefer option 1.

– This is the ideal time for being ready to get out of the house. With just Winston it was easy to get our before 9am, but with Rufus having a feed at 10:15am I normally wait until this is out of the way before going anywhere.

– Winston doesn’t like eating his lunch before his nap so he will have snacks around this time.

– Both Winston and Rufus nap around this time. Winston will usually sleep for an hour and a half and Rufus will sleep for around two. Obviously if we’re out and about this can be unpredictable…but if I am desperate for a nap and I’m at home I can usually get them to sleep at the same time.

– If we’re out Winston will fall to sleep in his car seat or in the pram – if he’s given food and tired enough.

– Winston will wake up and I’ll sort his lunch out which at the moment is likely to involve soup and more soup. He is also into having copious amounts of pesto on toasted pitta bread.

– Feed Rufus and Winston and if we’re at home Winston will play with his train set, cars or jigsaws.

– I usually start dinner prep around 4pm. Winston always ‘helps’ me He has a special spot on the work surface where he will sit. Rufus is either in the bouncy chair or in a sling depending on how he’s doing.

– I sit Winston down to eat his dinner and feed Rufus.

– Jared gets in from work and we eat together – yes Winston does have two rounds of the same thing!

– Rufus has another feed and Jared plays with Winston until it’s time for bed. We always make a point of reminding him that he will be going to bed soon.

– We start thinking about bedtime and take them both upstairs. Depending on the state of each of them we might give Winston another shower and Rufus a bath but certainly not every day. Baths make Winston hyper.

– We read to Winston on our bed.

– Winston goes to bed listening to nursery rhymes (new thing and works a treat). He likes the landing light on and his door slightly ajar.

– Rufus is slowly getting more into an evening routine. If he gets fussy after his 6:15pm feed then we know he is tired, but it can vary quite a lot. He can also have wind during the evening so the amount he sleeps between his 6:15pm and 10:30pm feed can vary quite a lot. He is getting more predictable though so soon we should have our evenings back.

– Rufus’ last feed of the day and he’s usually awake for around an hour.

– Both Jared and I really like this part of the day. We both get to spend time with Rufus and he is usually quite smiley. We used to love this feed with Winston too.

– Rufus goes to sleep which at the moment is mostly in our bed. Sometimes he can fall to sleep himself but quite often one of us rocks him to sleep swaddled, which normally doesn’t take to long – something Win never enjoyed.

– Rufus wakes up for a feed and (almost always) goes straight back to sleep.

Then we start the whole lot again at 6:30am. 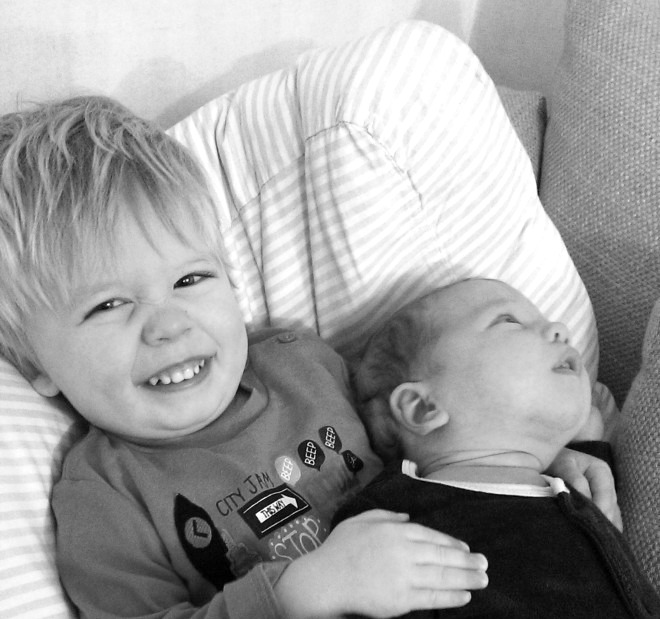